click the button below
Listen to some traditional Ecuadorian music while you scroll!

Ecuador has a tricolor flag, with yellow, blue, and red, horizontal stripes (respectively). Yellow signifies the Sun, Gold of Ancestors, and fertility in agriculture, while blue represents the sky, sea, and independence from Spain. Additionally, red acknowledges the blood that was given to achieve independence. The nation’s coat of arms lies in the center, which pictures an Andean condor, a native South American bird, which is also pictured on the flags of Chile, Bolivia, and Colombia. This great bird is a symbol of power and strength. Beneath the Condor is a framed scene of the Chimborazo Mountains, Ecuador’s highest peaks, which are also the farthest point from the center of Earth. Above the mountain, there is a sun with a white band behind it. Along the white band, are the astrological signs for Aries, Taurus, Gemini, and Cancer, which represent the months from March to July, significant months in the nations history. The image also depicts the Guayas River, which is a sign of the wealth in each region of the country. On the river lies the Guayas (named after the river), Ecuador and South America’s first steam engine ship. 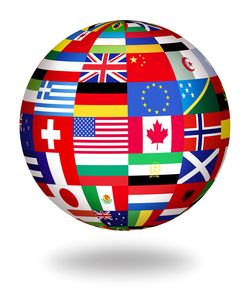 Ecuador's foreign policy has generally revolved around defending its territory against foreign and internal aggression as a result of the nation's history of struggle in gaining independence (see History video above). Foreign affairs have commonly been focused toward the United States, who is the leader of Ecuadorian imports/exports.
Peru
In 1981, Ecuador fought against Peru in the Paquisha War, a clash over three watchposts on the border of the two countries. Since then, Ecuador's foreign policy has been centered around it's border dispute with Peru. In 1995, Ecuador and Peru fought over a border dispute again, in a war known as the Cenepa War. Following a peace agreement, the Military Observers Mission to Ecuador-Peru was created in order to watch over this border zone.

Colombia
Following a Colombian raid against leftist rebels in Ecuador in 2008, the Ecuadorian President, Rafael Correa ordered troops to the Colombian border and withdrew the Ecuadorian ambassador from the neighboring country. Later that year, the Andean diplomatic crisis occurred, in which Colombian troops killed a rebel leaders along with 21 other people. After a consensus from the majority of South America against Colombia's actions, the presidents of Colombia, Ecuador, and Venezuela signed a declaration to end the crisis.

Venezuela
Ecuador and Venezuela have been diplomatically tied since their independence under the Gran Colombia and New Granada (Colombia and Panama then). Few diplomatic incidents have occurred between the two nations, and they have since strengthened their ties politically, militarily, and diplomatically.